Is my mobile print app cannibalizing my web-to-print revenue?

After our last OpEd mulling over the time-old question: “If I already have a successful Web-to-Print business, do I still need an App?” we got a lot of feedback and more questions from interested companies.  All are persuaded that an App is a better tool for creating print products on mobile devices but then wonder, “is my mobile print app going to cannibalize my web revenues”?

In other words: Are we fishing from the same well?

So in this article, we are going to dive right in (pun intended) and consider this question in detail.

When does your print App cannibalize your Web revenues?

Let’s first get to the very basics.  The image on the right is a simplified funnel showing Ad dollars generating your TOFU (Top of Funnel) traffic.  This traffic responds to your ad via a mobile or desktop browser.

In a modern Web-to-Print store, you will have a mobile-responsive platform (if your site is not even mobile responsive, please speak to our friends at Taopix.ai to get set up already!)

Your platform will serve up the same product creator feature in a portrait browser (Mobile) or a traditional landscape mode (Desktop).

There will be natural attrition, C and D.

And what comes out of your funnel is a successful cart check-out and revenue! 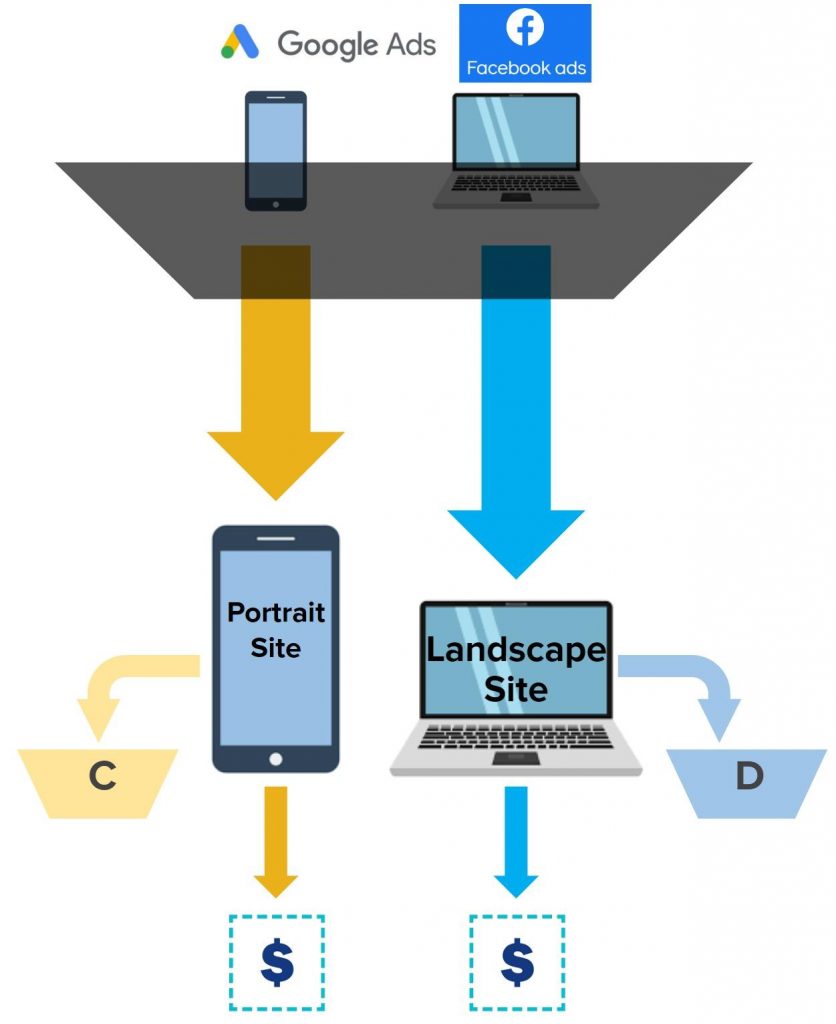 In this diagram, the right portion remains the same.  Visitors coming to you with a desktop browser (Mac, Windows, iPad) will use the web creator, and a segment “D” will not make it through.

On the left portion, you force* mobile visitors to install your native print App from the respective AppStores.

With this approach, you run the risk of attrition when you side-track traffic to an AppStore.  Thankfully, the AppStore is not a mall.  People don’t go there to browse around.  So they either install your app, or not (* we will talk about ASO-App Store Optimization in a later post)

(* in practice, you could give them a choice of using a mobile responsive site, or to use the app, or to practice product differentiation and segmentation…subject of another post.  But for this test, we are going to assume no choice is given to these constituents) 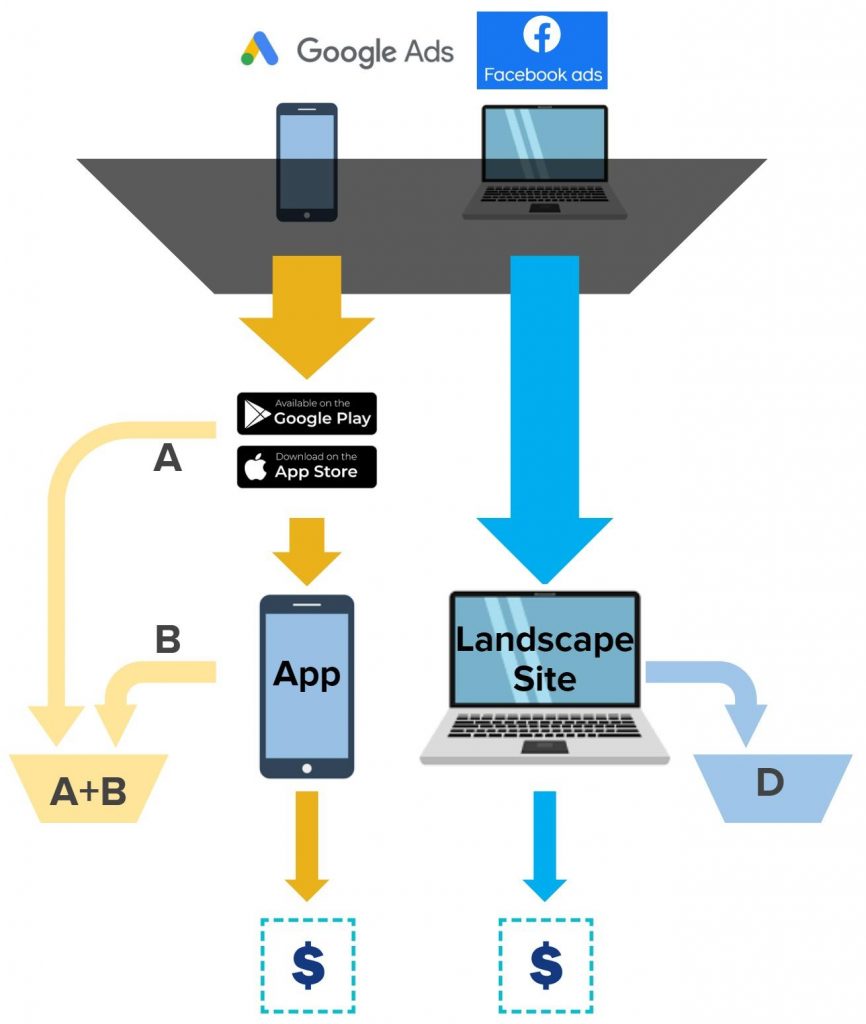 Great.  I am not about to plonk a wad of cash setting up a mobile app just to measure (A+B).  Common sense tells me A+B must be larger than C since there are two components, right?

Well, first, you should measure “C”.  You should be measuring that regardless.

For A and B, we have some proxies and “industry” standards; for instance, according to Kibocommerce, the bounce rate for eCommerce sites on mobile devices is around 43%. (and if you come to talk to us, we have other confidential data we can share with an NDA in place)

Reducing “A”  – Attrition from the AppStore

“A” is a fairly stable number in the industry, in 2022 , AppTweak found that the average conversion rate across categories in the US was 31% on the App Store and 33% on Google Play.  But don’t panic.  We are not advocating that you throw 67% of your mobile traffic away.  These are numbers where searches yields an AppStore link.  You should not be advertising with your app as a target.  Remember: you are selling photobooks (and other print products).  You are not selling an App.  So market your products, not the App.  Bring the right people in.  The App or Web is merely a creation tool.  So if you are bringing in well targeted audience with your marketing spend, then your “A” value will be way lower than generic measurements like this which would include games and other free tools.

Further reducing “A” leakage depends on a few things, but it’s not rocket science to optimize them and get them below industry average.

You have to get the basics right.  Which is something you have to do whether its a landing page or an App store listing.  Good graphics on the AppStore, good writing and copy in the listing.  Follow all the ASO rules.  Keep them fresh, and most importantly, users are not going to eat stale fish.  If they see the last time an app was refreshed was 6 months ago, they will walk on by.

All our white-label mobile client print apps get new builds every Friday.  This means any visitor who lands on the AppStore listing will never find an app older than a month, typically.  And these aren’t just bug fixes.  We often sneak in little feature improvements here and there.

So what is “B”, the natural attrition from a native app?

According to Criteo’s research, mobile apps has 3X higher conversion rates than mobile sites and generates 4.2X more product views.  In fact this is in line with our own client’s data which we shared earlier this year at Dscoop Rockies about the ROI of having AI. So roughly speaking (ok, some funky math here) B is about a third of C (mobile responsive site leakage).  So unless you fail miserably at optimizing A, you are guaranteed to do better with an app strategy, even if mobile traffic is smaller than web.  (but we all know the sector that is growing exponentially are mobile users).

What happens the day after the first sale...

With a web-only platform, each sale is hard-won in the battlefield of adwords and SEO and discount codes.

But once you get your app installed, then your store is in their pocket all the time.

You have direct reach to these users without having to advertize and pay Facebook or Google for the privilege of speaking with your users.

Sure, previous customers are on your mailing list…and EDMs still work somewhat.  But open rates have been plummeting, and with Instagram, FB Messenger, Slack, WeChat, WhatsApp, Telegram…there are so many slicker ways to communicate both at work and socially.  Email is fast becoming a tool only for HR to send company-wide pronouncements…

With an app, over time, you can reduce your ad-spend on customer acquisition, improve margins and continue to generate volumes.

All our white-label print apps come with in-app messaging hooks.  Some are rule-based (like when you take a lot of photos, or cart abandonment) and some are triggered.  We are also rolling out subscriptions and pre-paid Print Club features so that our clients can generate accretive recurring revenues from their installed base. 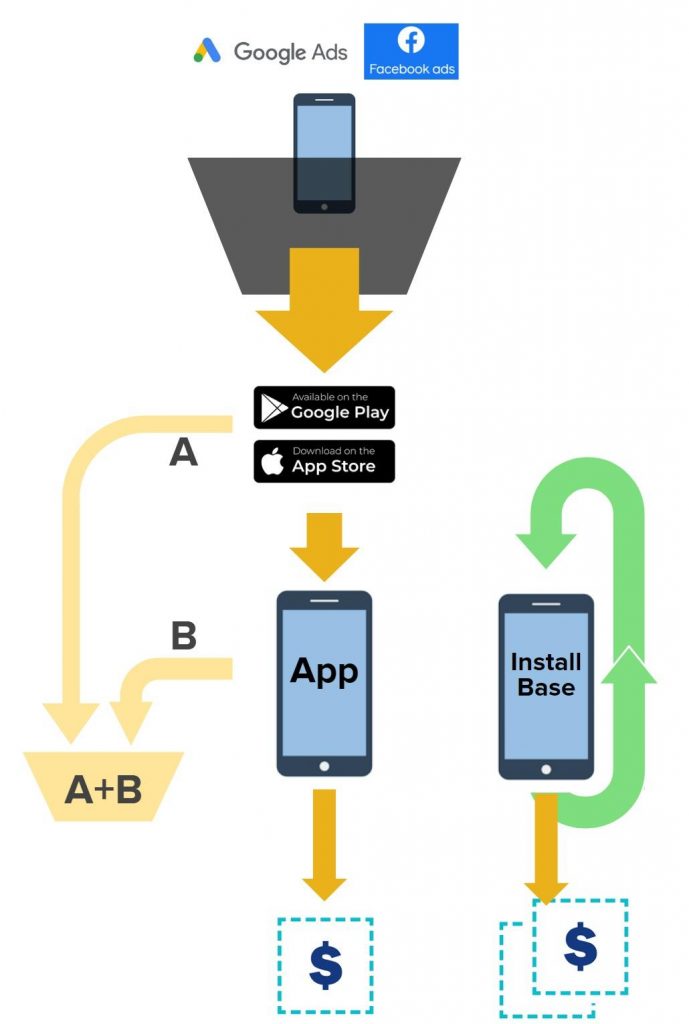